THE HISTORICAL BUDDHA By H.W. Schumann

The Archaeological relics of the Buddha’s life

Gautama Buddha, also known as Siddhārtha Gautama,[note 4] Shakyamuni Buddha,[4][note 5] or simply the Buddha, was an enlightened teacher who attained full Buddhahood and shared his insights to help sentient beings end rebirth and suffering. 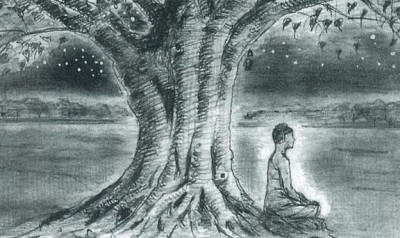 Gautama Buddha, also known as Siddhārtha Gautama,[note 4] Shakyamuni Buddha,[4][note 5] or simply the Buddha, was an enlightened teacher who attained full Buddhahood and shared his insights to help sentient beings end rebirth and suffering.

Most people accept that Siddhārtha Gautama did exist and was a historical figure. the Buddha was born probably in or near 581 B.C. His death was probably in or near 501 B.C (at the age of 80), a few years before that of Confucius. His father is Suddhodana King, an elected chief of the Shakya clan, whose small kingdom – the capital city of Kapilavastu was located in what is now Nepal. His mother is Maya Queen (Māyādevī), a Koliyan princess.

According to the Buddhist tradition, Gautama was born in Lumbini, now in modern-day Nepal. Gautama was born a prince, but from a young age he became aware of and was profoundly troubled by the problem of human suffering. He became increasingly possessed by a longing to abandon the secular world and go out in search of a solution to the inherent sufferings of life. Buddhist scriptures describe four encounters which served to awaken in him an awareness of four sufferings common to all people: birth, aging, sickness, death; and a desire to seek their solution. Eventually he renounced his princely status and embarked on a spiritual quest to understand how human suffering could be overcome.

For several years, he subjected himself to ascetic disciplines but found it impossible to reach emancipation through such self-mortification, and eventually rejected these practices. Then, he seated himself under a pipal tree and entered meditation. One morning at the age of thirty five, he realized enlightenment while practicing meditation, seated beneath the Bodhi tree. There he attained an awakening, or enlightenment, to the true nature of life and all things. It was because of this enlightenment that he came to be called Buddha, or “Awakened One.” Thereafter, he spent the rest 45 years to move slowly across India until his death at the age of 80.

2. Sources of the Buddha’s life

The primary sources for the life of Siddhārtha Gautama are in a variety of different. These include:
– The Buddhacarita,
– The Lalitavistara Sūtra,
– The Mahāvastu,
– The Nidānakathā (The introductory chapter of the Jātaka Commentary)

Of these, the Buddhacarita is the earliest full biography, an epic poem written by the poet Aśvaghoṣa, and dating around the beginning of the 2nd century CE. Other versions appeared even later in the tantras, such as in the Chakrasamvara literature. There, the Buddha taught the tantras.

The Lalitavistara Sūtra is the next oldest biography, from Mahāyāna/Sarvāstivāda biography.

The Mahāvastu (from the Mahāsāṃghika Lokottaravāda sect) another major biography, composed incrementally until perhaps the 4th century CE

Both Lalitavistara Sutra and Mahāvastu Sutra were outside The Three Basket-like Collections (Skt. Tripitaka, Three Baskets) but these added the important imformation.

The Dharmaguptaka biography of the Buddha is the most exhaustive, and is entitled the Abhiniṣkramaṇa Sūtra,

The Jātaka tales retell previous lives of Gautama as a bodhisattva,

Sources of the Buddha’s birthday:

3. An overview of the Four Holy Places

While staying in the Sala Grove at Kusinara a few hours before he attained parinirvana, the Supreme Buddha was addressing the Venerable Ananda about the four holy places of Buddhism: “There are four holy places, the sight of which will arouse strong feelings of reverence. Those who have faith should visit these places.

3.1. Lumbini, the birth-place of the Buddha

Lumbini Park, now is known as Rummindei in Nepal which is the Birth Place of Prince Siddhattha (the Buddha). Situated one hundred miles north of Benares.

It is near the capital of Kapilavastu of the Sakya tribe, in the foohill of Himalayas. The place is now known as Rummindei within the territory of Nepal, about 15 miles east of Kapilavastu. It is the place where Queen Maya, on the way from Kapilavastu to her parental home in Devadaha, gave birth to Siddhartha Gautama, in the month of May in the years 624 B.C. in a beautiful garden full of green and shady Sal trees.

Lumbini there had been many establishments, but very few are now in existence. At the present time, there exists a stone column that king Asoka had erected there on the occasion of a pilgrimage in the 249 or 250 BC. The inscription reads: “Twenty years after his coronation King Devanapiya Piyadasi came here and commemorated his veneration because the Buddha, the sage of the Sakya clan, was born here. He had a stone relief and a stone column set up to show that here a venerable one was born. He exempt the village of Lumbini from taxes and reduces its tribute.”

The statement of King Asoka on the stone pillar proves the identity of the sanctified spot beyond any doubt. Besides the pillar, there is an ancient shrine with an image representing the nativity of the Buddha as described in the sacred texts; Maya Devi Temple right on the side of the sacred pond in which Queen Maya took a bath before delivery of Prince Siddarttha; ruins of ancient monasteries; a Sacred Bodhi tree. As the birth-place of the Buddha, Lumbini becomes an important Buddhist pilgrimage site.

On December 7, 1997, UNESCO declared that Lumbini, one of the holiest places of Buddhism, World Heritage Site.

Asoka’s Stone Pillar at Lumbini, Maya Devi Temple, the sacred pond. Ashoka′s pillar on the western side of the Maya Devi temple. This pillar discovered in 1896 was erected during the reign of Emperor Ashoka (3rd century BC). It is believed to mark the place where Ashoka visited Lumbini

A place near the bank of Nairanjana River in Central India (Bihar), also called the Citadel of Enlightenment because it was where the Buddha attained enlightenment or supreme wisdom (bodhi).

After six years of practicing extremely ascetic cultivation without any success, Prince Siddharta abandoned asceticism and adopted the middle path. He sat in meditation under a Bodhi tree near the bank of Nairanjana River, and made a great vow to get up only after attaining enlightenment. His efforts were finally paid off after seven days of meditation, when He became enlightened.

Bodh-Gaya – Sacred shrines and stately monuments were raised all around. The best especial temple in Bodhgaya is The Mahabodhi temple because Mahabodhi Temple is not just a temple but Buddha’s actual enlightnment place. Built by Ashoka in the third century and restored by the British in the year 1880, the temple got its due acknowledgment in the year 2002 when it was declared a World Heritage Site by UNESCO.

the Mahabodhi shrine at Bodh-Gaya is approximately 160 feet high and consists of a straight pyramidal tower with many storeys. The shrine enshrines a great gilded figure of the Buddha touching the earth which symbolizes the supreme event of enlightenment.

Bodhi-tree (wrongly identified by Fa-Hsien as the palm-tree) under which Sakyamuni attained his enlightenment is among the oldest and the most venerated trees in the world.

Under the Bodhi is Vajrasana (Diamond Throne) – the place where Buddha attained Enlightenment, which is under this Bodhi tree. The Diamond Throne is made of red sand stone, and was built in the 3rd century B.C. by Emperor Asoka.

Around the shrine lie innumerable remains of which the most important are portions of the stone railing which represent two different periods of construction, the earlier going back to about the second century B.C., and the latter to the early Gupta period.

Sarnath, one of the most famous Buddhist centers in India, in Uttar Pradesh, about 10 kilometers from Varanasi. After enlightenment in Bodhgaya, the Buddha went to the Deer Park to deliver His first sermon to five ascetics, setting in motion the profound law, which is known as the four noble truths. This is where the foundation of Buddhist Order was laid.

The Emperor Ashoka (304 – 232 BC) visited Sarnath around 234 BC, and erected a stupa here. The Dhamek Stupa has been built around a smaller Stupa erected during the time of Asoka in around 234 B.C. to mark and spread the Buddha’s message of compassion and loving-kindness.

This Chaukhandi was built in around 4th – 6th CE to mark the meet of Lord Buddha with his five companions.

The Dharmarajika Stupa dates from the 2nd century CE,[1] and was built in order to house relics of the Buddha

3.4 Kusinagara (skt)—Kusinara (p) – the place where the Buddha entered his Mahaparinirvana.

That is the place where the Buddha entered Nirvana in the Sala Grove (the Buddha passed away without any sorrow at 80 years of age in a grove of sala trees north of Kusinara, about 543 years before Christ). The Buddha laid Himself down on His right side, with one leg resting on the other, mindful and self-possessed, between the two Sala Groves on the banks of the Hiranyavati river in Kushinagara, uttered His final words: “Listen, all conditioned dharmas are subject to decay. Strive with diligence.” Then, He entered into deep meditation absorptions and eventually He entered into Mahaparinirvana on the fullmoon day of Vesakha. After his death, his mortal remains were cremated and a part of his relics were preserved in a stupa or pagoda in Kusingara.

The Mahaparinirvana Temple which enshrines a 6 meter long statue of the Buddha in the Parinirvana posture and is  made of monolith red-sand stone.

The Ramabhar Stupa is the cremation place of Buddha. This site is 1.5 km east of the main Nirvana Temple on the Kushinagar-Deoria road.

Located approximately 400 yards from the Parinirvan Stupa and Mahaparinirvana temple, Matha-Kaur Shrine, as it is locally called, houses a colossal idol of Buddha. It is 3.05 meter tall and built out of a single block of blue stone brought from the Gaya region in Bihar. It is installed on a large brick platform. The idea was to present the Buddha sitting under the Bodhi tree in Bhumi Sparsh Mudra or an earth touching posture. 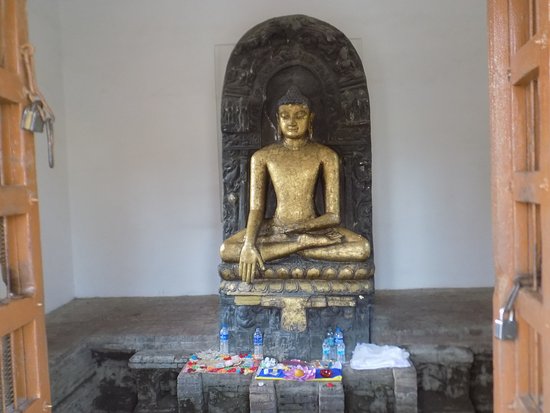 THE HISTORICAL BUDDHA By H.W. Schumann